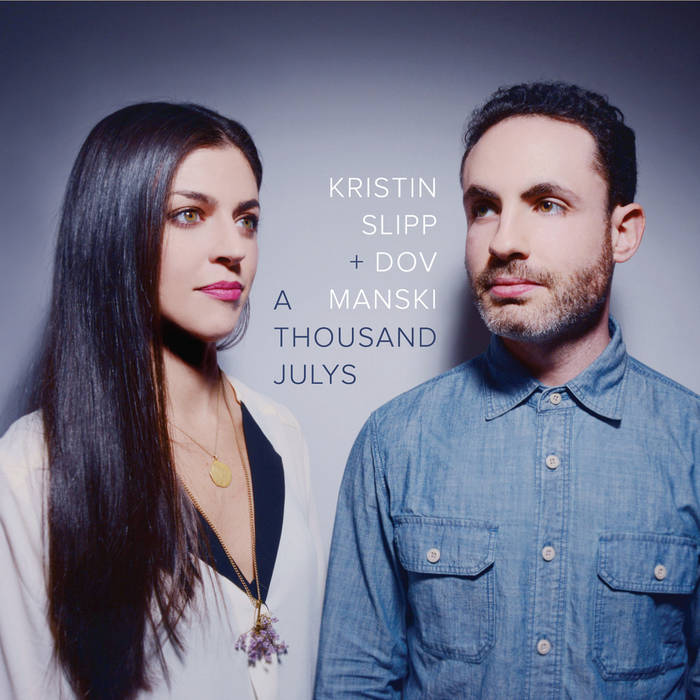 Young musicians attempting to break into the world of jazz are generally confronted with numerous obstacles, including the public’s expectations regarding the music’s legacy and originality. Discerning listeners are rarely graced by performers who appropriate well-known music of the past, transforming it into something entirely contemporary.

Two musicians who have made it a goal to impart their love of classic jazz repertoire and the pursuit of en vogue sounds and image are vocalist Kristin Slipp and pianist Dov Manski. The duo’s new recording, A Thousand Julys, presents their unique take on compositions made famous in the golden age of vocal jazz recordings with an approach unlike that which has been heard previously.

Both Slipp and Manski hail from Maine but first performed together while attending New England Conservatory. The two young musicians discovered an easy rapport based on their love for music of all sorts, including pop, indie rock and western classical music, both having played in a variety of musical settings outside of the jazz idiom. Each musician’s assets and attitudes inspired the other to try new approaches in their collaboration.

It was their common admiration for popular music that made the duo consider how they should approach the classic compositions of Jerome Kern, Hoagy Carmichael, et al. Most importantly, they didn’t want to fall into the typical jazz clichés and conventions presented through the ages: flamboyant vocal gestures, gushy arrangements, and over-sentimentality. Instead, they chose to treat these songs simply, letting the songs speak with unadorned, pop-like arrangements.

Slipp and Manski chose material based on a number of principles of accessibility: the lyrics had to be timeless and relatable, the arrangements should be minimalist, providing for vast possibilities in interpretation, and the compositions would have interesting melodic content that catches the ear.

Their work was influenced by a number of sources. Slipp cites the vocal prowess of young Betty Carter as important to her particular sound, especially Carter’s 1960 recording of “What A Little Moonlight Can Do.” She also mentioned the importance of Charles Ives’s work, especially his 114 Songs and Three Places In New England. Manski was particularly inspired by the late recordings of Billie Holiday, especially her 1958 album Lady In Satin, where Slipp and Manski discovered a number of the songs they interpreted on A Thousand Julys.

Manski arranged the pieces with considerable input from Slipp, and a few songs were arranged spontaneously upon recording. The end result is a collection of pieces that are esthetically beautiful but also challenging. Together, Slipp and Manski simultaneously honor and defy the traditional concept of the vocal jazz album.

The recording begins with a spare, lilting version of Kern and Harbach’s “Smoke Gets In Your Eyes” contrasted by a bouncing rendition of Carmichael’s “I Get Along Without You Very Well” which follows. An intoxicating, ringing piano introduces a vulnerable, undulatory vocal on Coots and Gillespie’s “You Go To My Head.” The offbeat “The Way You Look Tonight,” by Kern and Fields, picks up pace along with an intriguing dissonance, while Green and Heyman’s “I Cover the Waterfront” decelerates with an introspective moodiness. Charles Mingus’s “Duke Ellington’s Sound of Love” is ascendant with building piano and reaching vocals.

The plaintive “For Heaven’s Sake” is fleshed out by Manski’s warm Wurlitzer while Cole Porter’s “I Concentrate On You” features an intricate piano accompaniment under Slipp’s glissading melody. The youthful energy of “Just One of Those Things” dances along with rhythmic keyboard and waltzing voice. The flirtatious “The End of a Love Affair” precedes a dramatic, soaring version of “Violets for Your Furs.” The recording bookends with a quietly touching second take of the classic, “Smoke Gets In Your Eyes.”

Slipp and Manski have recorded an album that begins in the tradition but also deviates from it sharply. Their fresh takes on the touchstone compositions presented on A Thousand Julys will appeal to a diverse audience, including the longtime jazz fan and young, open eared initiates weened on indie rock.

Bandcamp Daily  your guide to the world of Bandcamp